Beyond Pink and Blue, Pt. 3: Doubling Up for a Great Nursery for Twins

We’ve talked about a boy’s nursery in Part 1, and we’ve talked about one for girls in Part 2, but some of you are sitting at home and saying “Yeah, yeah, that’s all well and good, but what if my oven is a bit fuller than that?” Well, for all you oh-so-lucky parents expecting twins (and for those who’ve already had ‘em!), today’s all about you.

Designing a nursery for twins is all the challenge that it is for one child, and then some. Not only do you have to double up on things like cribs and space, but having two babies at the same time means you as a decorator will have to decide whether to play up to the whole twins thing or to just stick to an all-around theme that doesn’t focus on the whole “There’s two of them!” thing.

Since we’ve already covered where to get decorations in our previous two articles in this series, today we’re gonna focus on themes and some cute little ideas that can help you knock that double nursery out of the park.

Playing Up the Twins Factor

Going for a room that focuses on the fact that your little ones are two of a kind doesn’t mean you have to go corny, old-fashioned or expected! We’ve seen some incredibly adorable twins’ rooms that play up the double nature of the kids in fun and fresh ways in the past few years, whether done obviously or very subtly.

Dual-toning the room is a very cool way to show off your new twin babies, and there are a lot of options with this theme. If you’ve got one kid of each gender, playing the two traditional colors against each other (pink and blue) by making one side of the room each color (with a little bit of each in the opposite’s side, for balance) can elevate the cliche to something fresh and fun. This can also be done for boy-boy or girl-girl twins- you just need to pick complementary colors and go for it! Another very neat idea we’ve seen along this line is to paint the room all white or another neutral and then make the objects in the room that “belong” to each kid correspond with a color you choose to represent each. 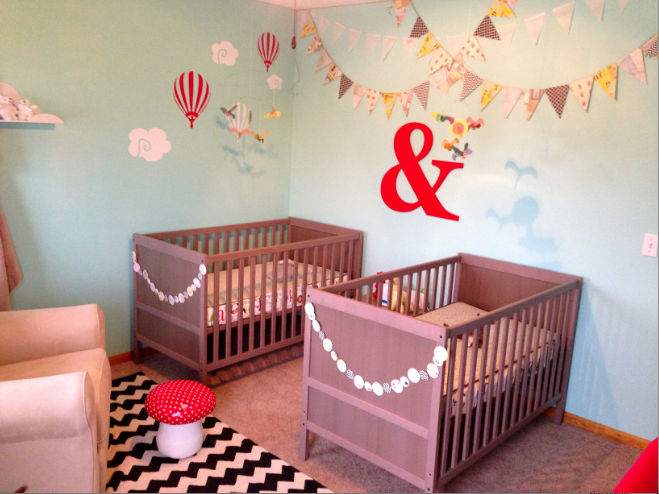 We’ve all been in the rooms of twins that have names that start with the same letter, and you see that letter repeated all over the place. This can get a bit messy and tacky, and we think it’s a fad that’s on its way out, but there is something similar you can do that’s hip, clever and subtle all at the same time. Instead of putting the actual letter everywhere, decorate the room with things that start with that letter. So if you have an Erin and an Eric, elephants, exclamation marks, elves or Egyptian references would all make great decorations. You can even extend this idea to the colors in the room, making things emerald on eggshell and the like. 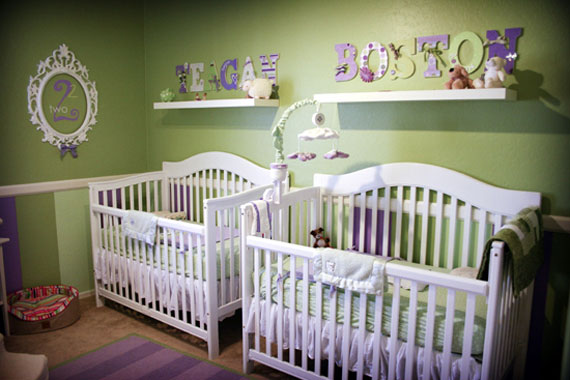 Another fun idea is to go with a theme that lends itself well to the number two. For instance, an airplane theme that has the two kids as pilot and co-pilot is adorable. For a boy-girl set of twins, having each on one side of the room set up as prince and princess with a crib-area designed to look like a castle or throne is also super-cute, if a little more traditional.

For some, the idea of turning the twins thing into a theme isn’t the way you want to go, and that’s totally acceptable! Any of the themes or designs we’ve mentioned in the previous two articles in this series can be easily adapted to twins of the same gender, and some, such as the “mod” look, the “explorer” theme or the Victorian look are all great gender-neutral designs. Color-wise, neutrals with a bit of an accent such as green or purple are also excellent for either or both genders. 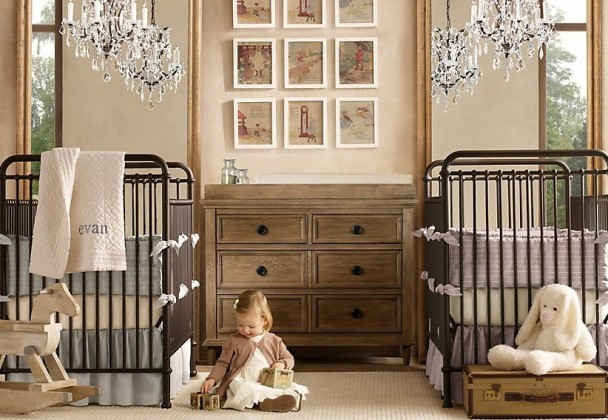 Since you will have two cribs in the room, however, it does create an automatic focal point, so you’ll want to take that into consideration when designing the look. A couple ideas include keeping both cribs together on one wall lengthwise, with a bit of space between them of course, or putting them against walls on opposite sides of the room to create a balanced feel. If you want them on the same wall, or not on a wall at all, and you keep them so their longer sides are parallel, make sure you put enough distance between the two that they can’t reach each other (we’ll talk more about this kind of thing in our next article on baby proofing the nursery).

A Few Thoughts to Keep in Mind

Beyond the look, there are a few things you’ll want to keep in mind when setting up your nursery for twins that will be different than a single-kid nursery. For one, you’re gonna need twice as much of just about everything. From cribs, to space to storage, you’ll need to make sure you take into account that there will be a need for more than the one. You don’t want to come to that dreaded moment when your twins have gone through all the diapers you had storage for before you were able to make it to the store, trust us on that one.

Another issue is safety, and while, again, we’ll talk more about this in the next article in terms of general tips, a twin’s bedroom has twice the amount of possibilities for safety hazards. Since you’ll be cramming twice the stuff in the room, you’ll need to think about each piece you get so that you can design the room for optimum safety. For instance, you don’t want a crib too close to furniture or windows, and you don’t want anything hanging over it. That means that in smaller nurseries, your options for what you can fit in the room will be more limited, as will the areas that are safe to put the cribs.

One further though: remember that eventually, these kids will grow up. Will they be sleeping in the same room once they’re a bit older, and is this the room? Painting the room a color now that will work in an older kid’s room later can save a whole lot of time, for instance. This isn’t the top priority when building a nursery, obviously, but it’s a good thing to keep in mind so you can save yourself some work in the future.

Stop back here in a few days to get some more tips on baby proofing your nursery, and in the meantime, good luck with the two bundles of joy you’re about to design a room for! Remember to check our previous two articles for more tips on nurseries for boys and for girls, and have a wonderful week, Prestige Painting friends.